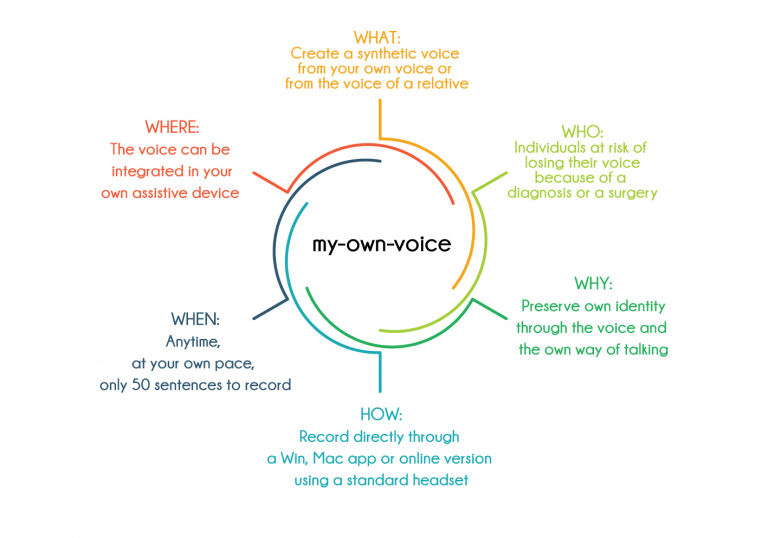 ‘My-own-voice’ online service offers individuals diagnosed with speech or language disorders the possibility to create their own digital voice.

With ‘my-own-voice’, users can keep speaking and communicating using a digital copy of their voice, helping them maintain their identity. The digital voice, created using the end user’s recordings, can be used with an assistive device to read any sentence, keeping the essence of the original in terms of timbre, accent and intonation. The voice and way of speaking are instantly recognizable.

Track record
My-own-voice was initially launched in 2015, as a world premiere. Version 2, released in 2018, two years to the date, was a technology breakthrough, based on Acapela’s neural text to speech (DNN/Deep Neural Networks) technology. Since that last version, a lot was achieved and the solution came a long way.

In two years, over 4000 additional patients have subscribed to the service, around 2300 voices were created and about 800 delivered.  Feedback from patients, vendors, clinics and other institutions was gathered and analysed in order to provide the community with Version 3.

What’s new?
Only 50 sentences (compared to 350 previously needed) are now required to complete the recordings through the Acapela Recorder Windows/MAC OS version or the new online version, which can be done in approximatively 10 to 20 minutes. The process was shortened, tiredness reduced, concentrating on fewer sentences is easier and audio results are very good with such little audio input.

The user interface was improved and now offers the possibility to add up to 300 custom messages, thus capitalizing on the user’s voice identity – such as wordings and expressions of the user.

Voice tuning can be personalized to optimize the result according to the user’s preferences and the user can be even more comfortable with the digital voice generated.

Once again, my-own-voice was improved, but the concept remains the same. Each patient is able to create a voice, free of charge and test it online through a type&talk demo. The voice, once purchased, can be used in Windows and Android (both as a system voice) or iOS (bundled with an application). The price of version 3 remains unchanged, and offers two options: annual subscription for 99 EUR or USD per year or a onetime license fee of 999 EUR or USD. Online payment options are now available.